The Composition of Sentencing Commissions

Sentencing commissions vary greatly in their purpose and structure. This article will examine the composition of sentence commissions and how members are selected. This is an introductory overview for the 23 jurisdictions on which data is available.1  Some sections of this report will compare commissions with and without a mandate to develop sentencing guidelines to see how their composition differs.2

How Many Members are on Each Commission?

An average sentencing commission has around 17 members, but the number varies significantly across jurisdictions. Oregon and the federal government have the smallest commissions at 7 members, Ohio has the largest at 31. Some of the larger commissions are those that have broader mandates to develop and implement sentencing policy, but not to develop sentencing guidelines (e.g., Missouri, Louisiana, Connecticut, Illinois, and New Mexico). See The Role of Sentencing Commissions to learn more. The average number of commission members is around 20 in these states. Note that some commissions have non-voting members that act in an advisory role; these members are often ex-officio.3

Chart 1. The Size of Sentencing Commissions 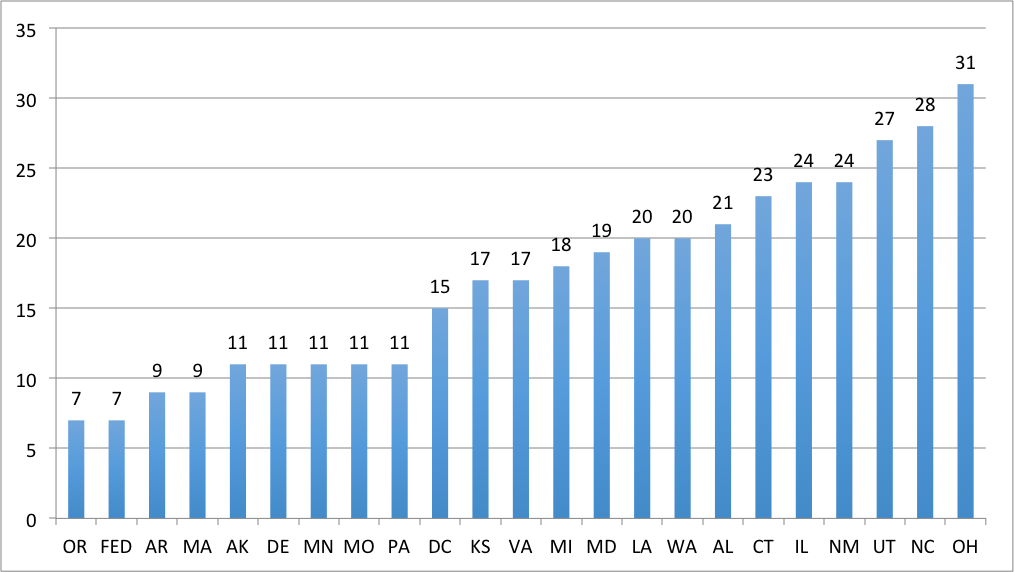 Who Sits on Sentencing Commissions? 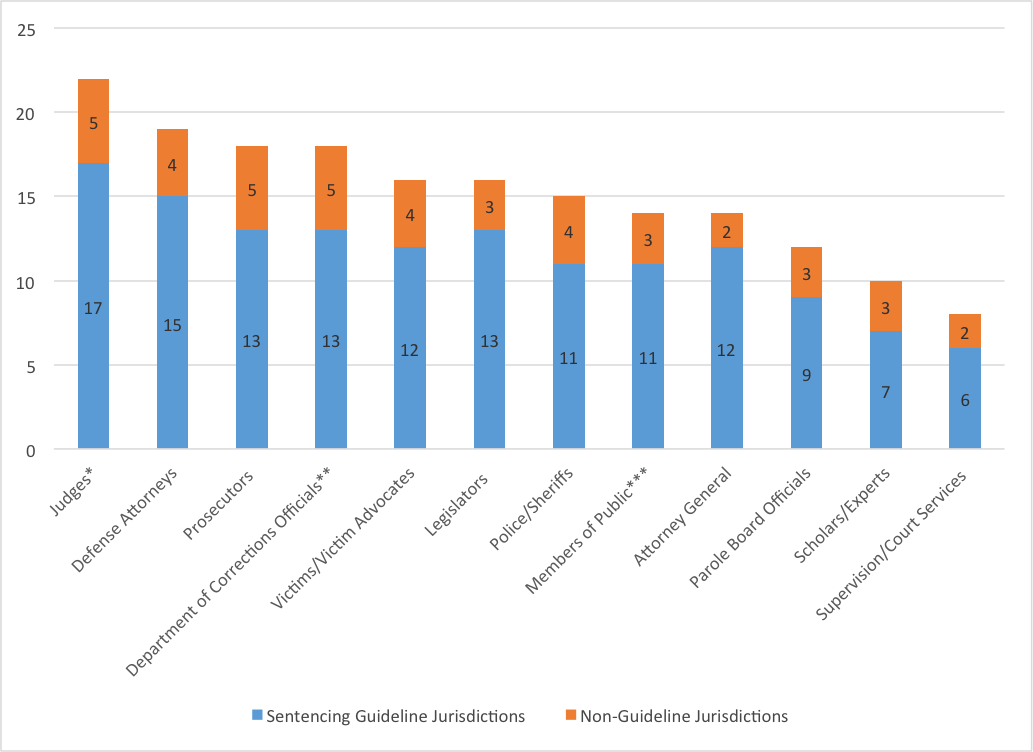 *In addition to other judges, Chief Justices may sit on sentencing commissions in Alaska, Alabama, and Kansas. However, in each of these jurisdictions, they are also free to appoint a designee to serve in their place. In Ohio, as discussed below, the Chief Justice serves ex-officio as the chairperson of the commission.

**This is often the head of the Department of Corrections (or an equivalent body) appointed ex-officio.

***Members of the public are individuals with no other specific qualifications to serve.

Note that in most jurisdictions, ex-officio members of a commission may appoint a designee to serve in their place. Thus, for example, Alabama’s chief justice and governor have never served on that state’s commission.4

Judges sit on nearly every commission, which is probably to be expected because sentencing has traditionally been a judicial function. Most commissions contain both prosecutors and criminal defense attorneys, and some states also appoint attorneys outside of the criminal law field.5  A handful of states include judges, attorneys, and officials who have expertise in juvenile justice.6

The current Governor or their designee may sit on the commission in Alabama and Illinois. The legislative branch is also represented on many commissions, sometimes along with statutory language that attempts to reduce political partisanship.7

Local and state law enforcement personnel8  and department of corrections officials9  are heavily represented on sentencing commissions. Others involved in the criminal justice system include public safety officials,10  community supervision professionals,11  and parole board members.12

Some states allow various types of criminal justice specialists to play a role in sentencing; these may include mental or behavioral health professionals,13  criminologists and other academics,14  policy experts,15 and/or other experts with unique perspectives on the justice system.16

The voices of crime victims and their advocates have been particularly well incorporated into most commissions (but only North Carolina’s commission includes a former prison inmate).17 Representatives of county18  and local governments19  and communities20 play a role in some commissions. Finally, members of the public with no specific qualifications to serve are often also part of sentencing commissions.21

How are Sentencing Commission Members Selected?

The selection process for appointed commission members varies greatly from jurisdiction to jurisdiction.22 In some states, one official has the power to appoint all members; other states have much more complex arrangements. For example, Connecticut has 23 commission members, some of whom are selected by the Governor, Chief Justice, President Pro Tempore of the Senate, Speaker of the House, Senate and House Minority Leaders, and Senate and House Minority Leaders.

Chart 3. Which Officials Have Appointment Powers in Their Jurisdiction? 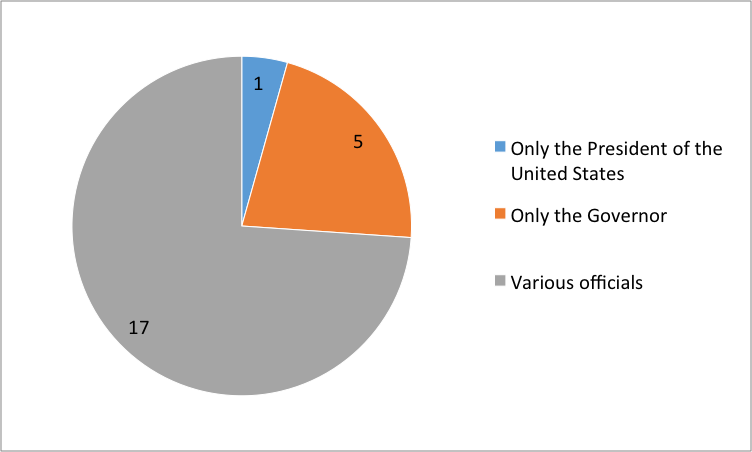 The Governor has a role in selecting some commission members in 18 out of 23 (78.3%) of the sentencing commission jurisdictions; however, in most states other officials also participate. In 5 jurisdictions, the Governor is the only person who selects all appointed members of a commission.23

Chief Justices also play an important part in selecting some commission members in 14 out of 23 (60.9%) of the sentencing commission jurisdictions. The Speaker of the House and President Pro Tempore of the Senate have the power to select some commission members in over half of the sentencing commission states. In Ohio, Kansas, and Connecticut legislative minority leaders also have some selection power. Some states utilize individuals with special expertise to choose specific members of commissions; for example, Alaska’s Native Justice Center selects an Alaskan Native member, and the New Mexico District Attorneys’ Association selects a prosecutor.

Who is the Commission Chairperson, and How is that Person Selected? 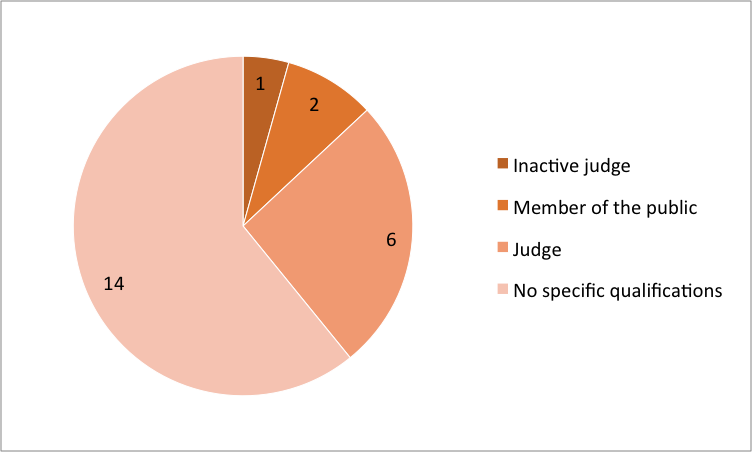 The chairperson plays a leadership role in each commission. In a majority of sentencing commissions, there are no specific qualifications for who is selected as chair. In seven commissions the chairperson must be either an active or inactive judge. Two jurisdictions, Michigan and New Mexico, require a member of the public to serve as the chairperson.

Chart 5. Selection of Head of Commission 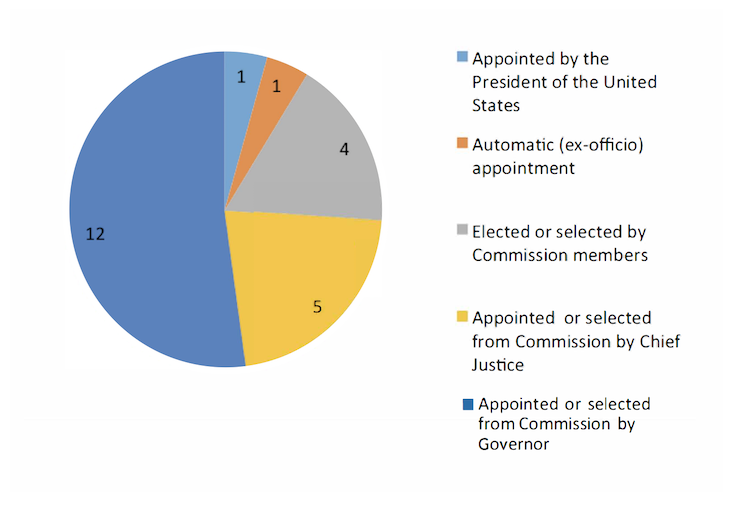